It happens to be Earth Day today, so I thought I’d write a little something about what a beautiful planet we have. That was especially easy to notice on our spring break trip this year, which we spent camping in Malibu, California.

For five nights, our family of five slept together in a tent. I was a little concerned about how everyone would sleep, and whether the sand and dirt would be bothersome. It turned out that the sand and dirt were most entertaining, and we all slept like logs after big days at the beach. And there’s something special about being so close together. 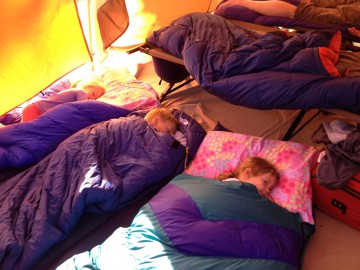 Leo Carrillo State Beach is the most unique beach I’ve ever seen. Because of how the rock walls curve in and out, several small beaches are accessible for anyone who takes the time to find them. We preferred one that was a ways down from the main beach. For much of the time, we were the only people there. The scenery and animal life was spectacular. I’ve never before seen sea caves and rock tunnels that actually take you from one beach to another. I think I was just as enthralled (or more) than our kids. Once we got through the rock wall, we came to an area of tide pools where literally thousands of sea anemones and mussels were thriving. 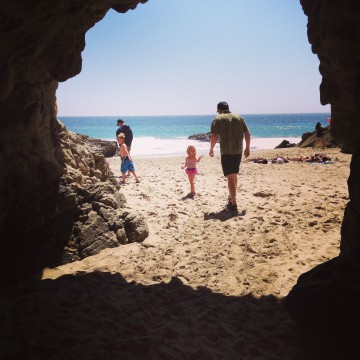 In addition to the tide pool life, we saw whales and dolphins off the coast, and one morning when I was out alone for a walk along the beach, I came across what I thought at first was a dog sitting on the rocks scratching it’s ear. As I got closer to the golden, furry creature, I realized it was a seal! So I sat down about five feet from it, just me and the seal. I watched him for ten minutes or so, thinking he might hop off his rock and head back to the sea. He was content just soaking in the morning rays. There’s nothing quite like hanging out on the beach alone with a seal. I could have reached out and touched it. But I didn’t. Do seals bite?

I wish I could have taken a picture of that seal, but my phone (with its camera) had run out of batteries, and we had no way of charging it.  Though that was disappointing, there’s something to be said for the screen-free life. No music, no podcasts, no calendar, no schedule.  My morning walks offered blissful escape from the commotion of regular life. For about an hour every morning, while everyone else slept, I walked up and down the coast. I looked for shells, discovered starfish and sea slugs, watched the ocean, and had some time with my thoughts. How rarely that seems to happen in life. I’m committed to making it happen more often. 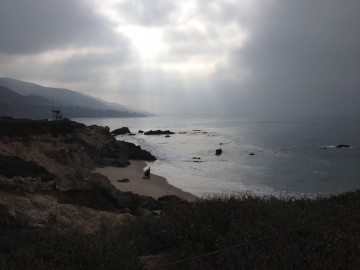 Perhaps my favorite part of the trip was the fact that we had each other’s undivided attention for five days out in nature. No video games or television shows for the kids. No phone calls or meetings. Just time together. Scott and I much of the time just sat next to each other on the beach and watched our kids laugh together, run from the waves, and dig holes in the sand for hours. We are, after all, each other’s best friends. With so much time together, that was easier to remember than when we are all running around in the “real world” of work, school, sports, and the stuff of life. I guess it takes these moments where we unplug from everything where we can finally focus on what matters most. 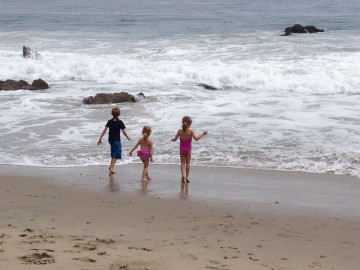