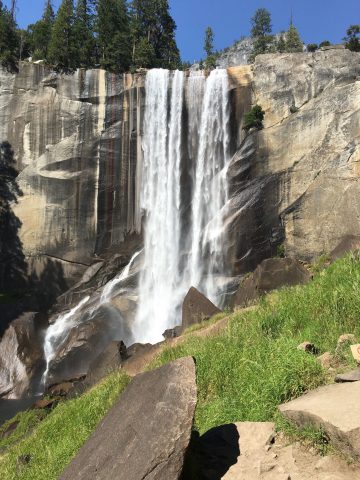 After experiencing gorgeous waterfalls, blue skies, granite cliffs, and colorful meadows, Yosemite is now one of my favorite places on the planet. Our family visited at the end of July, and I just couldn’t get enough of the cool hiking experiences and breath-taking views. I think I said “Wow” more times in one day than ever in my life. If you haven’t been here, please go.

My favorite hike was on Mist Trail, where we hiked the few miles and hundreds of stone steps to this incredible waterfall. You could actually see a rainbow in the sunshine and mist at the bottom of the falls. This was a great hike for our kids–challenging but doable, with a great reward at the end. We thought the end of our journey would be the falls, but to our surprise, just past the falls was a giant pool of water, complete with natural rock waterslide! 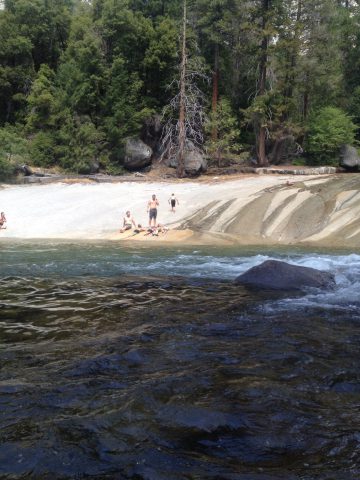 Despite none of us having swimsuits, most of us somehow ended up in the water. My son was the first to throw his shirt and shoes to the side and jump in. Then my daughter joined. My husband and his brother got in and swam over to the waterslide. Then my sister-in-law (more adventurous than I ever realized) said she was going for it, fully clothed. I started to realize this was not an opportunity to miss, so I counted down (my perennial weakness) and jumped in the frigid water alongside her. We swam over to the waterslide, hiked up the smooth rock surface where it was dry, then slid down into the water. Super fun!

If that wasn’t enough of a surprise, we also saw a bear (the only bear I’ve ever seen in the wild) traipse across the rock surface not 50 yards from where we had just slid down the rock. A bunch of teenagers who were on the same side of the pool started screaming and running toward the water. Luckily, the bear took no interest in them and just kept walking along until it disappeared back into the brush.

At night we camped just outside the park’s south entrance at Summerdale Campground. As we were setting up our camp, our camp neighbor shouted, “Scott, look!!” We looked up in the sky and there was a huge orange and pink meteor streaming across the sky, with tiny pieces breaking off so it looked like a dozen blazing shooting stars all together. It was the most incredible thing I’ve ever seen in the night sky. Our kids were enthralled. Amazing! Come to find out, it was apparently some kind of Chinese satellite junk. Not quite as cool, but still.

The other neat and unexpected experience at camp was crawdad fishing. I haven’t done this since I was a kid, but our camp host said we had to try it. So we put a hotdog on a string and literally, within minutes, we could see the crawdads in the water creeping toward it and climbing on. It took us a few tries to get the things out of the water and into a bucket, but eventually we caught 8 or so. We kept 6 to cook because, well, why not? We are all about new experiences. We boiled them and cracked them open. They tasted fine. A lot of work for the two bites out of each one, but it was fun.

Our little family miracle of the trip happened to our 10-year-old son Zach. He had just picked out a souvenir from the trip that day, a neat wooden pocketknife with his name etched in. While we were fishing (pretty much in the dark) his pocket knife fell out of his pocket. We all looked around but couldn’t find it anywhere. After all, it was wood colored. We said we’d try again in the morning. We suggested to Zach that he say a prayer, and went to bed. The next morning, Zach and Scott went for a walk and I said a quick prayer that, if it be God’s will for him to find this little treasure, he would find it. I understood that God may want Zach to have the lesson about taking care of his things, and I was open to that result. But that lesson is of course much less fun. The other lesson would be that prayer works, and sometimes you even get the answer you are hoping for. Well, right after I said my prayer, Zach and Scott came back with big smiles. Zach said he remembered walking by a particular poky bush that made him jump the night before, so they went there. Lo and behold, they looked down, in the wood and grass and dirt, and there was his pocket knife. Yay for little miracles! 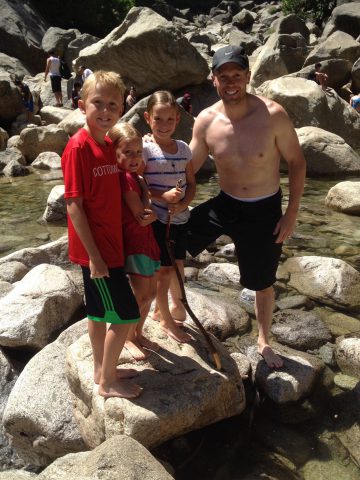 Playing at the bottom of Lower Yosemite Falls.

Another adventure was, when we went for a hike to Lower Yosemite Falls, which had another little surprise waiting for us: fun pools of water and lots of rocks for the kids the play in. We hadn’t learned our lesson about wearing swimsuits in this water haven, but we got in, again, in our clothes. The kids climbed and swam and splashed for hours. Too much fun. 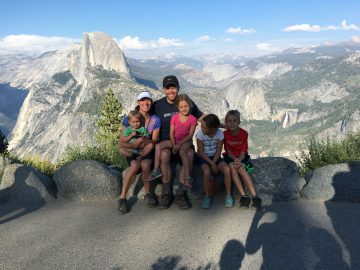 For a view of the valley, we drove out to Glacier Point, where we did a short walk to a lookout point. From there, we could see two waterfalls and 360 degrees of rocks, trees, meadows, and mountains. Beautiful.

On our way out of California, we decided to stop at Kings Canyon National Park and Sequoia National Park, mostly because we wanted more stamps for our National Parks passport books. OK, not really. Well, partly. We of course were excited to see what made those places so special, especially as we considered the 100-year anniversary of the National Parks system. Both parks were incredible. I especially loved the Congress trail with the huge groups of sequoia trees–the biggest trees in the world. It was incredible to be so dwarfed by nature. 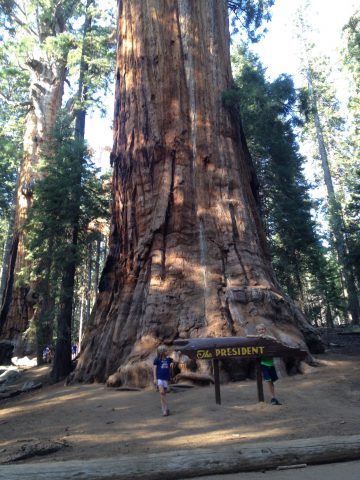 Overall–an amazing, wonderful incredible trip with some of my favorite people. We will definitely do this again. 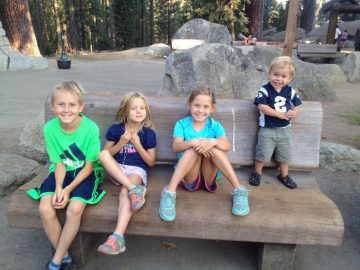 For spring break last month we took our kids to the beautiful Arizona city of Sedona. I wasn’t sure how camping was going to go with Sam, being still so small, but we figured we’d give it a shot. When looking for our destination this year, we had three important criteria: 1) warm enough at night to camp without being miserable and 2) close to cool National parks or monuments that would give us a stamp or two in our kids’ passport books. 3) Close enough to drive to from our home in Sandy, UT. Sedona fit the bill. 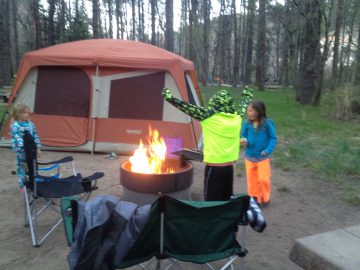 Well, mostly. The temperature was great during the day and was supposed to only get to the 40s at night, but with a few nights stretching into the 30s it was less comfortable than I would have liked. Everyone was fine in their mummy bags except for Sam, who didn’t have one. I bundled him as much as I could but he would still wake up in the middle of the night crying (unheard of for this angel baby). That at least gave me my co-sleeping opportunity, something I’ve never really taken advantage of with any of my kids, with good reason. I mean, I just don’t sleep very well with a little person next to me. But I have to admit I did love snuggling this sweet little boy every night.

What I love about camping is getting so close to nature and so far from the typical distractions of our modern-day world. No cell phones to use, no televisions to watch, no Kindles to fight over. We literally were just 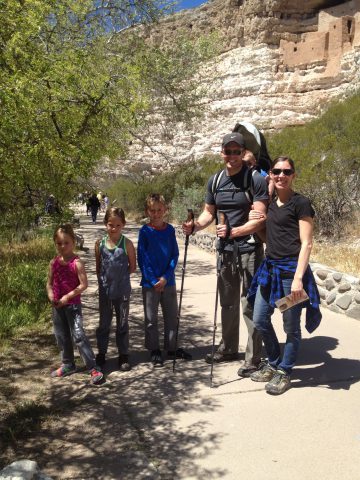 outside all day, enjoying peace. (Until it came time to doing all the work that camping requires–then there was a little less peace. But the kids got the hang of it fairly quickly.)

I loved seeing the National monuments near Sedona. First we went to explore Montezuma Castle, an ancient cliff dwelling thousands of years old. It was fun to watch my kids think through what it might have been like to live so close to the earth (and even in the earth) every day. We also checked out a similar nearby monument that let us get a little closer to the ruins of an ancient people. Our last experience with ancient life was on the way home when we stopped at Canyon de Chelly, another site from the lives of ancient Pueblo people. First things first: we got our passport books stamped. Check! Then we did a hike down into the canyon, saw the ruins in the cliffside along with some cool wall art, and then hiked back out. This was our 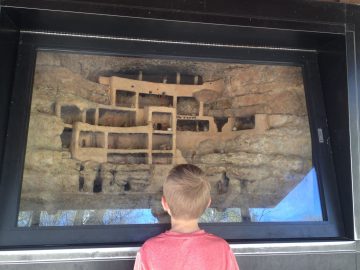 first hiking experience where all three of our older kids beat us to the finish line by a long shot. Scott and I were impressed.

Other favorites from this trip included a beautiful hike in Sedona, playing in the river by our campsite, visiting Slide Rock state park (with it’s 80-foot super cold natural waterslide) and my perennial campfire favorite: s’mores! After five nights of camping, luckily we were smart enough to check the weather and realize it was going to rain right at the time we needed to pack up our campsite. So we got on Priceline and booked a hotel in Chinle. Everyone was beyond excited to see actual beds. The kids slept for 13 hours straight, and I slept for most of that too. There’s nothing like appreciating simple pleasures after ruffing it for a few days! 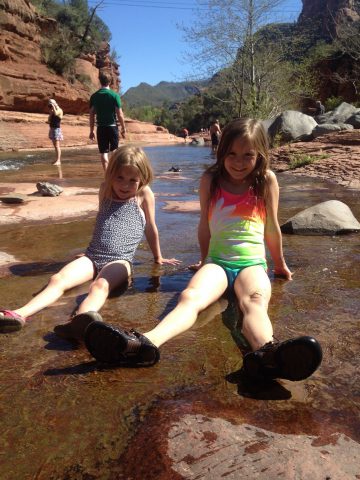 All in all, a successful, beautiful, super fun adventure! I highly recommend this area as a wonderful trip for families.