I love the story of a pioneer woman who worked all day making jam, then left the jars out a little too long in the sun. She realized the jam had fermented and was no longer good to eat. She figured she could at least give the jam to her chickens, who devoured it happily. A few hours later she came back to find her chickens lying motionless all over the yard. “I killed my chickens!” she moaned. She sat for a minute and then figured she couldn’t just leave them like that. She did the only thing that made sense. She plucked out all the feathers so she could cook the chickens. After hours of plucking, the woman went to tend to something else and came back to find the chickens back on their feet, running around the yard again–naked. (Apparently the chickens had not actually died but had only passed out temporarily from the fermentation). Naked chickens would get too cold with winter coming on. So she did the only thing that made sense. She knitted a sweater for each and every one.

I can’t think of a better example of resilience. This woman didn’t let a setback (or two or three) get her down. She didn’t fester on what a failure she was or give up entirely because it was too hard–although it would have been easy and understandable to do either one. Those early settlers were made of some tough stuff, and I, for one, would love to gain more of whatever it was. What makes the difference between someone who responds to adversity with courage and optimism and someone who feels incapable of going on?

We live in an era where mental fatigue in the form of depression and anxiety is growing rapidly around the country, especially for young people. According to a 2016 American College Health Association survey, nearly 37 percent of college students reported feeling so depressed at some point during the previous year that they found it difficult to function. That’s a 40 percent increase from 2008. Kids are having a hard time facing the challenges of life. Some of these challenges come in the form of chemical imbalances that can only be addressed with counseling and medication. But some of these challenges are just life’s way of pushing us ahead in our journey. We can get passed them if we have developed a resilient soul.

“Resilience,” is a word that can be used to describe a material that bounces back quickly when it is stretched. Defined another way by renowned psychologist Adam Grant, “resilience is the strength and speed of our response to adversity.” As he explains in his and Sheryl Sandberg’s new book Option B: Facing Adversity, Building Resilience, and Finding Joy, “It isn’t about having a backbone. It’s about strengthening the muscles around our backbone.”

I’d love to help my children strengthen those muscles so that when they face obstacles in this crazy, complicated world, they’ll know what to do. In the next 10 years, my kids are going to be stretched by school, jobs, relationships, technology, social media, sickness, peers, temptations, and all sorts of other challenges. If I have a child that at some point faces a mental health challenge, then I will do my best to help them find the resources to get through it. But even the healthiest of children will need to know what to do when their best friend moves away, or they fail a test, or they lose a job, or they trip on stage, or they miss the game-winning goal, or they just flat-out mess up. Is there anything I can do to prepare my kids to walk away from these challenges successfully? Experts say yes. Here’s how:

Yes, depression and anxiety are rising, possibly because life has never been quite so complicated. My kids are still young, and I have no idea what kind of physical, mental, emotional, or spiritual difficulties they will face. But I’m a big believer that I can help them have a few tools ready for the oncoming battle. I can teach them to make mistakes, take a deep breath, shake it off, and try again–when they are ready. After all, we all have mountains to climb. Sometimes we rise and sometimes we slip. My goal is to help myself and my kids keep moving ahead.  And every once in a while, we can look back, enjoy the view, and be darn proud of how far we’ve come. 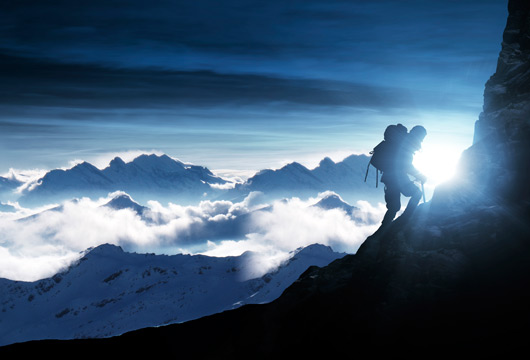