For my “A is for Abinadi” launch party, I had some little stickers made up with heroes from the book. Just some of my favorites–Nephi, Queen Esther, Mary with Joseph and Jesus, Samuel the Lamanite, Eve, and Captain Moroni. I thought it would be a fun giveaway for the kids who came to the party. I let my kids pick out the ones they wanted to keep. My son, who’s eight, picked one of each and put them on a white paper. Then he wrote “My favorite scripture heroes” at the top. I thought that was cool, but didn’t think much more about it.

A couple of weekends after the party we were finally moving our littlest child out of her crib because she was turning four and she was old enough to insist that she “needed a big girl bed.” But why? You’re so cozy in there! OK, we knew it was time. With our other two kids, we always had a new baby motivating us to move one child out of the crib to make room for the next. This time the incentive was low. But when she was ready, we got ourselves excited too. Before we made the move, our oldest son and daughter were sharing a room. We took this opportunity to move the girls in together with the bunk bed and let our son finally have his own room–much to his delight.

Kids have a way of putting the things they love up on the walls. We all do. And now that this was his own room, he had free reign. The first thing he wanted up was the poster of an alligator he got as a prize at school with the word “Smile” written in what looks like it’s supposed to be blood. Cringe.

His grandma gave him a pin board so he could pin up other things that are important to him. We set up the board for him above his desk and let him go at it. When I walked in later that night, I found the scripture hero sheet pinned up on his board. Now, when he sits at his desk, he has these spiritual giants to look to. That made me smile. It was a moment that, for me, summed up the whole reason I wrote “A is for Abinadi.” I wanted kids to be familiar with the amazing men and women in the scriptures and maybe, just maybe, let those people be their heroes. 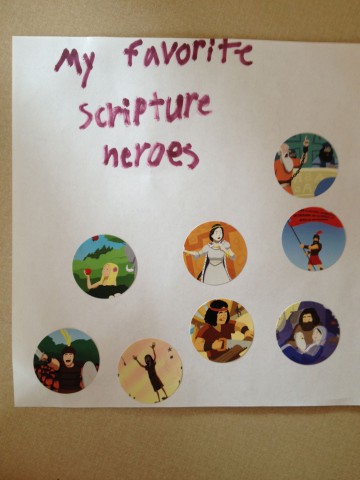