Monday night we got free tickets to take our family to the Jazz game. Our girls had never been before, and we were all excited for a night out. We sat down at the top of the arena and looked down on the players. They were so small, and the giant screen in front of us was so . . . giant. I don’t think the girls were paying as much attention to the actual game as they were to the dancers, the gift-giving blimp, and the little bags of popcorn I brought in my purse.

Third quarter got ugly. Our players weren’t shooting well. We were fouling left and right. We were even missing our free throw shots. I told Scott “This isn’t looking good.” He smiled as the girls were climbing all over him, clamoring for turns to be tickled. He offered to take them for a quick walk around. Zach and I stayed to watch, since he was into the game. He was cheering out “D-fence,” as the jumbo-tron encouraged, but we gradually fell further and further behind. I was looking at the clock, feeling like maybe this hadn’t been the best idea to keep our kids up so late. Especially if we were going to lose. (I know–terrible attitude, right?).

A few minutes later Scott came back with the girls. In their hands was a giant bowl of ice cream. Cookie dough and Moosetracks–my favorite. I had to smile as everyone huddled around and dug in to the bowl with their own personal plastic spoon. Scott doesn’t even eat dessert (hasn’t for years) but he seemed to get as much joy out of watching us as we got consuming it. The night had been redeemed.

We didn’t win that game–not really even close. But as we were walking home I asked Ellie how she like her first Jazz game. She smiled at me and said “I didn’t even want to leave!” She didn’t care at all that our team was shooting terribly that night. She had her family, and a fun outing, and part of a big bowl of ice cream. Who really needs anything more? 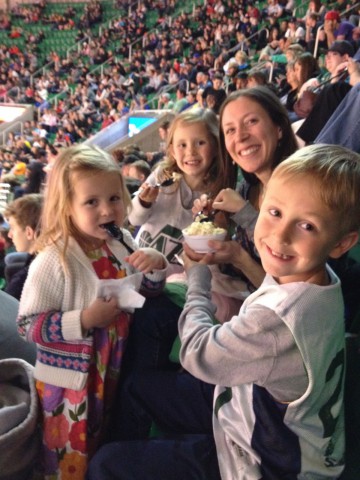