When my husband and I were first dating, for my birthday, Scott surprised me with a dozen white roses. Boy did I love those roses. And I was falling hard for that boy. He got me a dozen roses on our honeymoon and another dozen on our first anniversary. He’s a “go big or go home” kind of guy. I think he thought that was the only way that giving flowers should be done.

As time went on, as the story often goes, life happened. We got busy with school and jobs and kids and cars and mortgages and everything life throws. I didn’t receive the beautiful bouquets for some time. Which was fine–because for so many of those early years we were poor students with no extra spending money.

A few months ago, Scott was having lunch with a client (we weren’t students anymore) who asked him, “When’s the last time you brought your wife flowers?” Scott hummed and hawed a bit and then said, “It’s been a while.” The man replied, “Go get her some.”

Scott followed his orders and came home with a lovely bouquet. I was surprised and touched by the gesture. Almost every week since then, he’s brought home flowers. They haven’t been the big, expensive bunch of roses. Instead, he’s often come home with a simple group of colorful lilies or daisies. Just this weekend he came home from getting a haircut with a little bunch of daisies for me. It costs him less than $3 for those daisies. (I know because I do the finances.) But oh how well spent that $3 is! In that simple gesture, I know that my husband is thinking of me, wanting to make me smile.

Sometimes we think that only the grand, sweeping gestures matter when, really, the little things mean just as much, or more. I always loved the roses. But it’s amazing how much a simple bundle of daisies, given for no reason on a rainy Saturday afternoon, can communicate about love.

What have you done to love your spouse today? 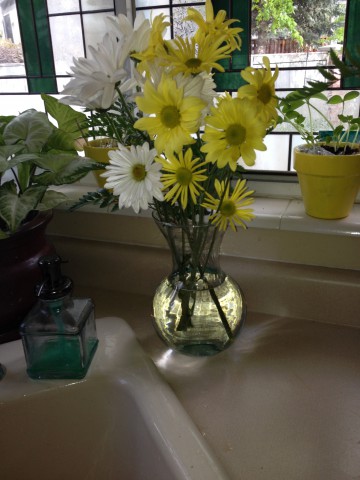