A few weeks ago Scott and I went in for our 20 week ultrasound. I had been waiting for that day pretty much ever since we found out we were pregnant. I had always been excited about the ultrasound for our three other children too, of course. That glimpse into the womb gives you a sneak peak of so much–a healthy baby, hopefully, first and foremost. But also learning if we were going to have a daughter or son was always so magical. We could start picturing how our little family was being shaped. For our first, we learned we were having a boy. I was thrilled because I had always wanted an older brother when I was growing up, and now I knew this little guy would be the oldest sibling. With our next pregnancy, our ultrasound gave us exciting news–a healthy baby girl. Now one of each! With our third pregnancy, we found out that our little girl would have a little sister, which made me so happy. Every girl needs a sister, at least in my book. So, with each ultrasound it was a little different, and always exciting news. But this fourth one was different.

Here’s why. I thought for a long time that we were done with three kids. Growing up with just two kids in the family, three felt like a lot. I felt like my hands were pretty full most of the time, and I was happy that each of our kids had two siblings. A family of five seemed like such a great number. I was content.

Then something happened when Scott and I were sitting at an extended family reunion around two and a half years ago. President Henry B. Erying was speaking, and he was talking about his brother. Something hit me then. Zach is supposed to have a brother. It was just a thought in passing. Maybe it was more like “It sure would be neat if Zach had a brother.” But the thought didn’t leave me. I drove away that day and couldn’t get the thought out of my head. Inspiration? Who knows. But ever since that day I couldn’t feel quite comfortable with our family of five.

Scott had been excited about the idea of having another baby for a while, but I just hadn’t been ready. But after this experience, we started to really talk about it, and sincerely pray about it. Both of us felt like a baby–a boy–was missing from our family. It was so weird to say that, because we had never felt strongly one way or the other about the gender of our other kids. Once we decided that, yes, we were excited to try for another baby, we went for it. It took us a while–longer than any of our other kids–but we finally took a pregnancy test that came up positive (after lots of negative tests taken in our impatient excitement). Then the question remained–were we going to get the boy we had felt so inspired was supposed to be in our family?

Twenty weeks went by, and finally the day of the ultrasound came. Again, first and foremost we were hoping to find that we had a healthy baby, with all the working organs and limbs he or she would need to start off life well. The tech dimmed the room and we stared at the images on the machine. I’m sure I was holding my breath. She took measurements, showed us a healthy heart, brain, stomach, arms, and legs. I loved seeing a beautiful little profile shot. What magic to see a glimpse of our child. Then Scott saw something. “Is it a boy?” he asked. The tech smiled and said “You stole my thunder.” Then she moved to a screen shot that showed so clearly. “Yes, it’s a boy,” she said. The emotion I was trying so hard to keep in control let loose and I cried. I squeezed Scott’s hand tightly as we looked at each other. “Zach’s going to have a brother!” 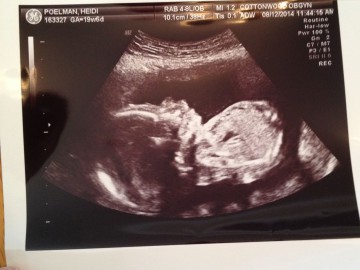 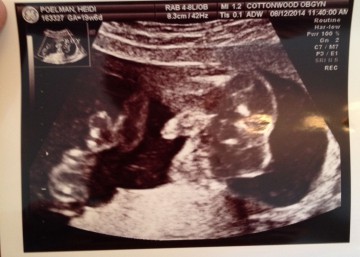 Telling our kids was magical. Scott and I stopped by Target on the way home and got three little boy outfits with gift bags. When we got to my mom’s house where all our kids were, we gave each one of them a bag. They pulled out the little boy outfits and all screamed. They had all been asking for a brother for the past year. 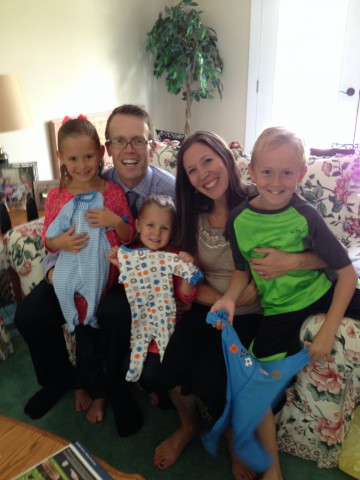 Now we anxiously await our Dec. 31 due date. We don’t know what he’ll be like or look like, but we know a little bit about him. We’ve seen him, after all. Besides that he will be the little brother in our home, we know that he will be one of the most loved little boys ever to come down from heaven. So, little man, we’ll see you in a few short months.